Blog Beninter \ Discovering \ Discover the British area of Benidorm: the most extravagant and lively part of the town 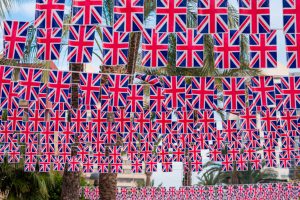 On this blog we have already told you about some of the Benidorm neighbourhoods. We have told you about the Rincón de Loix, La Cala and, especially about, the centre of Benidorm. However, today we want you to get to know the most peculiar, extravagant, animated and party area of ​​the town.

Visiting this area means leaving Benidorm and moving onto another universe. They speak a different language, eat different food, schedules are changed and they have different habits. It is located in the Rincón de Loix neighbourhood and its core is concentrated on Calle Mallorca. If you have already visited Benidorm, do you know what area we are talking about? English, Irish and Scottish people fill this area with a unique atmosphere. Does it sound familiar to you now? Exactly! We’re talking about the British area of Benidorm, popularly known as The Square.

The English Square receives its name because, indeed, the British tourists have made it their own part of the town. Many of them have ended up living there, others come to stay on long stays and others simply stay there for a short holiday. But they all enjoy the place that makes them feel at home and at the same time enjoy a climate and beaches like no other.

In this area you will find a gastronomical, commercial and leisure offer all orientated to the British public. And it is precisely for the leisure, that The Square is best known. Its party style and rhythm make a great atmosphere, debauchery and disinhibition take to the streets. And, with it, the feathers, the fancy dress, mechanical bulls, the stripper shows, the musical shows and a lot of other activities that last until the early hours of the following day.

Many curious visitors from other countries, as well as the Benidorm locals, often come to this place to have fun, live new experiences and enjoy a panorama, at the least, eccentric. You never know what you will find in the Square!

Lining the streets of the British area you can find bar after bar. Some have themes, others have the loudest music, others with giant tv screens on their terraces … Choosing which one to stop for a drink is a complicated task.

As you may have guessed, this area is one of the main party areas in Benidorm. Thanks to the atmosphere that is concentrated in it, the amount of clubs and also the opening hours, because here you can find a party 7 days a week starting in the afternoon and carrying on until the next morning.

The main clubs are Beachcomber, Hippodrome, Bahamas, Red Dog, Red Lion, Lennons and Joker’s. And we have only named the biggest ones! In them you can find different kinds of British music. You will rarely hear anything Spanish or Latin here. As for prices, they are higher than in the old town of Benidorm, but in contrast there are plenty of Happy Hours with which for a few hours a day you can get very good deals.

And if you want to enjoy the British area at its best, there are 2 dates that you have to write down on the calendar. The first coincides in mid-November, just after the Benidorm Fiestas. That’s when the “unofficial” parties are celebrated in The Square, The Benidorm British Fancy Dress Party. The second falls in March and corresponds to Saint Patricks day. Living Saint Patrick in Benidorm is an experience that we assure you will not leave you indifferent.