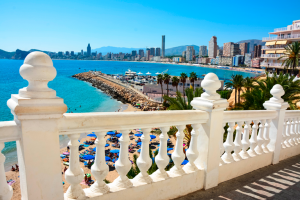 August is the month with the highest temperatures in Benidorm, the holiday month by excellence, in which the town is at its fullest, radiating life from every corner. We’re sure that the main plans during your stay will be the beach or the apartment pool. But let us tell you about a few other things that await you. What to do in Benidorm in August? Keep reading and find out!!

The list of artists visiting Benidorm in July was long. But August doesn’t fall short. Starting tomorrow, 2nd August, with Diego ‘El Cigala’ at the Julio Iglesias auditorium. Followed on the 4th August by one of the most anticipated concerts: ‘Operacion Triunfo Tour’ Benidorm has been chosen by the organization to be one of the last concerts and it will be at the Guillermo Amor Stadium. On the 5th Niña Pastori will be at Benidorm Palace and on the 22nd Ricky Martin closes the circle with his performance at the Guillermo Amor Stadium.

A stroll through Benidorm whilst enjoying a photographic exhibition

The Department of Culture is pledging for photography with an exhibition. ‘The war of the bikini. Photography and tourism.’ So until the 31st August if you go and take a walk through the streets of Benidorm you are bound to find many of the work pieces scattered around the town. Another way of getting to know Benidorm tourism through the participating photographers eyes.

Cinema on the beach, Benidorm

Last year the initiative of cinema on the beach was a success. Therefore, the council has decided to repeat with two more sessions this summer. The first took place in July and the second will be on August 24th with the free screening in the Mal Pas cove of the Finding Nemo film.(in Spanish) We cannot think of a better family plan to spend this Friday night.

Taking advantage of the public holiday on August 15, on Saturday 18, the Summer Remember Music festival arrives in Benidorm, it has already been a success in cities such as Madrid and Barcelona. From 20.00 to 2:30 in the Julio Iglesias Auditorium music that will take you back to the 90’s will be played. Do you want to join the party?